There are many, many water borne contaminants, viruses, bacteria and amoeba that still make it through today's purportedly high-tech water source processing, these include:

Used to kill life forms in the water, chlorine is a recognized carcinogen.

We are now entering into a period of increased water shortages. As reservoirs lower, water suppliers add more chlorine. This is because the number of micro-organisms in a reservoir do not decrease as water levels drop. They simply become more concentrated. Dosage will be lifted above recommended maximums due to the necessity of containing disease through micro-organism increases. During our last local drought, I could even smell chlorine gas from outside taps.

Chlorine in drinking water has been linked to increased incidence of bladder and rectal cancers by Harvard University and the Medical College of Wisconsin.

Chlorine is also linked to body protein damage. It causes dry skin and hair, and burns the eyes. If you suffer from asthma, sinus problems, allergies, skin rashes or emphysema chlorine in your water may well exacerbate your condition.

Chlorine kills bugs, but it also reacts with the organic matter in water, creating potentially toxic new substances. One such substance, trihalomethane, is far more carcinogenic than chlorine itself.

The US EPA labels Mutagen X ...another chlorine byproduct and seen as the 'single largest contributor' to the ability of municipal water to cause genetic mutations.

In excess of EPA's standard can cause stomach discomfort or anemia.

in excess of this level over many years could get bone disease, including pain and tenderness of the bones). EPA has also set a secondary fluoride standard of 2 mg/L to protect against dental fluorosis. Dental fluorosis, in its moderate or severe forms, results in a brown staining and/or pitting of the permanent teeth. This problem occurs only in developing teeth, before they erupt from the gums. Children under nine should not drink water that has more than 2 mg/L of fluoride.

Coliform bacteria are common in the environment and are generally not harmful. However, the presence of these bacteria in drinking water is usually a result of a problem with the treatment system or the pipes which distribute water, and indicates that the water may be contaminated with germs that can cause disease. Faecal Coliform and E-Coli are bacteria whose presence indicates that the water may be contaminated with human or animal wastes. Microbes in these wastes can cause short-term effects, such as diarrhea, cramps, nausea, headaches, or other symptoms.

This has no health effects. However, turbidity can interfere with disinfection and provide a medium for microbial growth. Turbidity may indicate the presence of disease causing organisms. These organisms include bacteria, viruses, and parasites that can cause symptoms such as nausea, cramps, diarrhea, and associated headaches.

These include germs, amoeba, parasites, cysts and viruses. In my experience chlorine does not fully eliminate these organisms. During our recent local drought, even though chlorine levels were drastically increased, local health practitioners reported a rash of parasitical infection.

Filtration level Is important for exclusion of parasites. Although nothing higher than one micron will exclude Cryptosporidium and Guardia, it requires a filtration of less than 0.1 micron to exclude viruses. Few people realize that flu viruses are carried on birds that migrate from Asia. These birds settle in our reservoirs, and outbreaks follow...

Is a parasite that enters lakes and rivers through sewage and animal waste. It causes gastrointestinal illness (e.g. diarrhea, vomiting, cramps).

Typically leaches into water from plumbing in older buildings. In the US, Lead pipes and plumbing fittings have been banned since August 1998. Children and pregnant women are most susceptible to lead health risks.

Disinfection byproducts form when disinfectants added to drinking water to kill germs react with naturally-occurring organic matter in water. These may include:

Some people who drink water containing trihalomethanes in excess of EPA standard over many years may experience problems with their liver, kidneys, or central nervous systems, and may have an increased risk of getting cancer.

Some people who drink water containing haloacetic acids in excess of EPA standard over many years may have an increased risk of getting cancer.

Some people who drink water containing bromate in excess of EPA standard over many years may have an increased risk of getting cancer.

Volatile Organic Compounds May combine with other contaminants to form new toxic substances. These include:

Is a fuel additive, commonly used in the United States to reduce carbon monoxide and ozone levels caused by auto emissions. Due to its widespread use, reports of MTBE detections in the nation's ground and surface water supplies are increasing. The Office of Water and other EPA offices are working with a panel of leading experts to focus on issues posed by the continued use of MTBE and other oxygenates in gasoline. EPA is currently studying the implications of setting a drinking water standard for MTBE.

Very few water systems can remove lead. Lead may be a problem in older homes where lead solder was used to join copper pipes. If the water supply is acidic, it will eat away at the lead - and copper - overnight, so that your first water in the morning may hold high levels of both minerals. for this reason it is always a good practice to run the tap for a minute or so before using the filter first thing in the morning.

As our society gains in ways to create new substances, we are seeing more and more synthetic substances turn up in our water supply. These include xenoestrogens, hormones, pain killers, tranquillizers, and almost every other drug imaginable including Prozac and Viagra. This is happening now, and has increased alarmingly as we become more drug-dependent. Drugs enter through water recycling, garbage disposals interfering with water tables, and just thoughtless dumping by individuals.

Although some water filter sellers talk about it, they do not actually know whether these compounds will be filtered out. We can only make the best choice of system within our means. 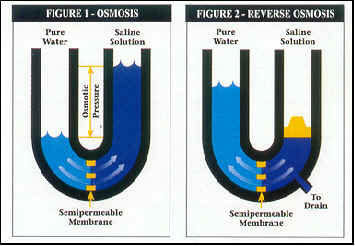 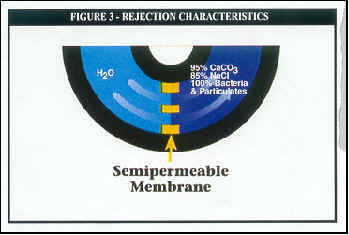 To understand  Reverse Osmosis  we must first understand osmosis. During natural osmosis, water flows from a less concentrated solution through semipermeable membrane to a more concentrated saline solution until concentration on both sides of the membrane are equal. (See figure 1)

A reverse osmosis membrane has a thin microporous surface that rejects impurities, but allows water to pass through.

- Reverse Osmosis for Home and Office use

There is no product to list in this category
Shopping Options