Detergents and Soap does not remove Iron and Manganese stains, and the use of chlorine bleach and alkaline builders can actually intensify the stains.

Iron and manganese deposits will build up in pipelines, water heaters, water softeners and pressure tanks. This reduces the flow and pressure of the water supply.

Iron and manganese accumulations raise other problems as water supply or water treatment and softening equipment must be replaced. There are also associated increased energy costs, like pumping water through constricted pipes or heating water with heating rods coated with iron or manganese minerals.

Polyphosphates Media react positively with dissolved iron and manganese by trapping them in a complex molecule that is soluble in water. As a result the iron and manganese are not available to react with oxygen and precipitate. Polyphosphates can be found is a form of a 10" and 20: filters or as a liquid that can be fed into the water system with controlled injection equipment.

Polyphosphate treatment is a relatively cheap way to treat water for low levels of iron and manganese. Depending on the type of polyphosphate used, water with 1 to 3 ppm of iron can be adequately treated.

Soluble iron and manganese can be exchanged for sodium using an Ion Exchange Water Softener. This process of iron and manganese removal is the very same ion exchange process that removes hardness or calcium and magnesium (refer to the softening circular in the Treatment Systems for Household Water Supplies series). Iron and manganese are removed during normal operation of the water softener then removed from the medium along with calcium and magnesium during regeneration and backwashing. Some water softeners are capable of adequately treating water having iron up to 10 ppm. However, others are limited to treating water with iron no greater than 1 ppm.

One of the best types of filtration to be used to remove Iron and Manganese in water is the Manganese green sand filter. The active material in "greensand" is glauconite. Glauconite is a green clay mineral. Glauconite often occurs mixed with other material as small pellets, thus the name "greensand."The glauconite is mined, washed, screened, and treated with various chemicals to produce a durable greenish-black product that has properties that allow it to adsorb soluble iron and manganese.

Greensand filters are rated to treat water with iron concentrations of up to 10 ppm.

Chemical oxidation followed by filtration is the best method of iron and manganese removal when concentrations are greater than 10 ppm. A chlorine solution is injected with a chemical feed pump or through a Tablet Chlorinator into an open tank, water have to settle for the chlorine to react.

Iron and manganese in water will be oxidized; soluble iron and manganese begin to precipitate almost immediately after contact with the chlorine solution converting them to ferric hydroxide and manganese dioxide. The flocculated material can then be removed by Sand filtration. The higher the amount of chlorine fed, the more rapid the reaction. Some plants have been designed for an initial chlorine residual of 5 to 10 ppm. After filtration the chlorine is removed by the addition of sodium bisulfide, sulfur dioxide, sodium bisulfide, or simply by Activated Carbon Absorption Methods.

An additional advantage of using the chlorination system is its bacteriacidal effect. Iron and manganese bacteria, along with other bacteria, are destroyed. Potential clogging problems in the sand filter are eliminated. Chlorination does produce trihalomethanes (THM) when organic matter is present in the water. (maximum contaminant level permissible in public water systems is 0.1 parts per million) and if necessary can be filtered out with an activated charcoal or carbon filter.

The optimum rate of oxidation of iron and manganese by chlorination is at a alkalinity level (pH) of 8.0-8.5, respectively. Soda ash injected with the chlorine will increase the pH to optimum levels. Adjusting the pH to alkaline levels also reduces the corrosive effect of the water to plumbing and fixtures. 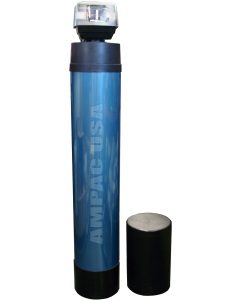 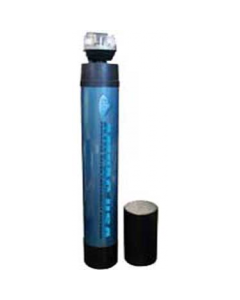